I checked everything you mentioned. I tried both carbs on the ATV today, the new and old one and they both overflow. Also took apart each carb and checked everything...it is cleaned as can be. Floats are well adjusted (that I know of), when I raise the floats gently by hand while I blow in the fuel line, it shuts off.

How much play should the needle have to seal with the seat? 1/4 in or?

Joined May 17, 2014
·
7,520 Posts
Is there the remotest possibility you have the fuel line and vacuum line inverted or have the fuel supply line on a float bowl vent nipple?
► Show Full Signature
Shop Owner and Mechanic with over 50 years experience
P

Joined Apr 23, 2019
·
21 Posts
Because the if you are talking about that line, it's got fuel coming out of it all the time, especially when I crank.

Joined Apr 23, 2019
·
21 Posts
It's got a constant drip coming out of it. Does that mean the fuel pump diaphragm is bad and allowing the carb to be flooded?

Joined May 17, 2014
·
7,520 Posts
Well, if has fuel coming out of it and it's the vacuum line, then it is supplying fuel directly to the intake and bypassing the fuel bowl on the carb - there should be no fuel coming out of that line at any time.
► Show Full Signature
Shop Owner and Mechanic with over 50 years experience

I looked up a fuel system diagram and the bottom black hose should be the fuel line right?

Joined May 17, 2014
·
7,520 Posts
Based on the specs the quad has a VM34SS Mikuni carb - we experienced mechanics may have been providing you with inaccurate information - it is the difference in working on them and describing them.

The VM34 carb fuel system does not have a vacuum port - it instead only has a fuel line from the fuel valve to the carb.

The carb has only 3 nipples identified in the following pic


With the fuel line connected to the proper inlet nipple and the float needle seat screwed into the carb body, the only reason for the carb to over flow is:
floats not floating
float level incorrect
float needle not shutting fuel off
defective float bowl (damaged by water/alcohol)
and if the float bowl has an overflow pipe - the pipe may be cracked or split (I don't believe the VM carb has the pipe)
► Show Full Signature
Shop Owner and Mechanic with over 50 years experience
P

Joined Nov 14, 2009
·
10,389 Posts
Uh Uh… a 2004 ATP 500 4x4 has a pump and therefore has a pulse line on the carb.
Bear, the pulse line nipple out of the pump is marked with a "P" like the picture in the first link below. It should NOT have any fuel coming out. It attaches to the nipple on the LEFT front of the carb closest to the engine and beside the choke plunger #11 and 13 in the second pic.
The fuel supply line should have a full stream of fuel anytime the tank is completely full or during cranking. It attaches to the elbow nipple on the RIGHT side toward the REAR of the carb just above the bowl. Its beside where the throttle cable and idle screw cable are located. 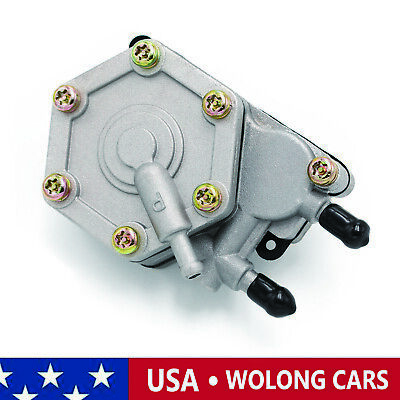 Joined Nov 14, 2009
·
10,389 Posts
What we have here latebird, is the OP's thread with the 98 Explorer has been hijacked by BEARGLOVE with a 2004 ATP 500. I'm answering one and you the other lol.
You need to start your own thread BEARGLOVE. This gets confusing for everyone... or maybe just me? lol
Sorry OP

Joined Nov 14, 2009
·
10,389 Posts
Ok, I looked back to the beginning and see what happened now. BEARGLOVE revived a 7 year old thread about a totally different machine rather than start a new thread to ask a question about his machine. You need to start a new thread in the appropriate forum section BG when you have a question. Tagging your question onto a years old thread about a different machine causes mix ups and erroneous info to be given.

Joined May 17, 2014
·
7,520 Posts
Yeah, that's what I did - I lost track of the discussion and went back to the original thread - sorry
► Show Full Signature
Shop Owner and Mechanic with over 50 years experience

Joined Nov 14, 2009
·
10,389 Posts
Hey, no problem BG. It takes a little while to get used to the forum ins and outs. latebird is just about always spot on so when he posted that about the older style carb I new something was amiss. That's when I started looking back at the original posts.
Check that pulse line to make sure you have things correctly connected and we'll go from there to get your carb problem fixed. It might help to print out my post #34 with the diagram to take to the garage with you.
Good luck and let us know what you find.
21 - 40 of 40 Posts
Join the discussion
Continue with Facebook
Continue with Google
or sign up with email
Recommended Reading
Read More
Read More
About this Discussion
39 Replies
8 Participants
Last post:
polman500 2 mo ago
Polaris ATV Forum
A forum community dedicated to Polaris ATV owners and enthusiasts. Come join the discussion about Rangers, Sportsmans, Scramblers, Magnums, and others. Research modifications, troubleshooting, maintenance, and more!
Full Forum Listing
Explore Our Forums
ATV Repair and Maintenance ATV General Discussion Polaris Sportsman ATV New Members Polaris XP
Popular Communities